NHL 18 is the latest installment in the long-running hockey simulator franchise and it comes in rather quietly. Launch trailers, gameplay reveals, and typical advertisement before the launch for the game was rather slow. And that is perhaps this is the off year for the NHL franchise.

What I mean by this: every so often, sports titles in particular, usually have a year where not a lot of new improvements or features were added to the new installment. We saw it with other sports games as well, MLB The Show, Madden franchise, and even the revered NBA 2K series. It’s hard for developers to turn out a new version of the game within a year. It takes time to come up with new gameplay mechanics, dynamic features, and an immersive story. 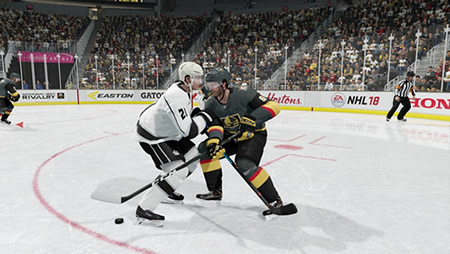 Even though this might be NHL’s “off year” it is still pretty good for Hockey fans and newcomers alike. I for one am a casual hockey player, so one of the problems I face every time I play NHL is that I just don’t know how to master some of the moves in the game. Passing and shooting are relatively self-explanatory, but actually understanding why I’m doing what I’m doing is always a concern of mine. This is where the new Training Camp brought to the game by Team Canada comes into play really nicely.

Before even starting this game and learning about the training camp, I told myself “I’m going to hit YouTube and learn a little bit about the gameplay and rules of Hockey. To my surprise, NHL 18 has a new feature which details moves, plays, and lets you practice them as Team Canada. This was an awesome feature that obviously made my time with the game so much more worth it. If you’re like me, you will definitely want to head to the Training Camp and sharpen up your skills with the new informative videos and practice demos.

Besides the new training camp, NHL 18 also comes with the new 3 vs 3 modes where players will be able to play circuits across the country, recruit players and mascots, and compete online. This was obviously one of the new big features of the game. This is where players can enjoy themselves with a little arcadey style of gameplay. The format is fast-paced and intense giving players a fresh feel to the usual style of playing NHL. It also comes packing a new hilarious MC which will voiceover the match alongside a modified version of the ice rink.

The NHL Threes is a good time and is worth checking out if you pick up the game; however, besides the two new features mentioned above – NHL Threes and Training Camp – NHL 18 seems to be recycled from last year.

Players can start their own franchise and take them to the Stanley Cup; create their player and have them join a team; or take their skills online and battle it out against other players. NHL still looks visually stunning with faces of players looking realistic, the crowds in the back get excited when a score is made, and the commentators with their dynamic conversations. The game is a solid buy for anyone who enjoys hockey, but for players who were hoping for new features or modes, this title will bum you out.