Have you wondered whether you should be digging into 8-Ball or 9-Ball for practice and play? Truly, 8-Ball is the superior game and will make your overall skills stronger.

To help you better understand these two popular pool games, below we will start by briefly summing up the few similarities they share. We will also explain the games of 8-Ball and 9-Ball in great detail—the rules, style of play, etc.—and sum up the differences between the two games.

8-Ball Pool is very much just the game you will know from playing casually at home or even at the local pub or arcade. The game is played with either english reds and yellows, or American spots and stripes. It can be played on any kind of table, either on an English table with 2” balls, or an American table with 2 1/4“ balls. 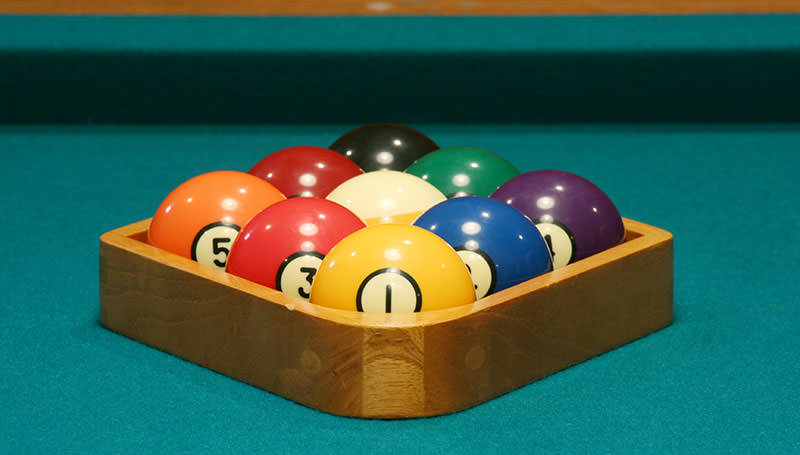 9-Ball can be played with a set 2” spots and stripes on an English table, but the regulation game played in tournaments is always on an American style table with the larger 2 1/4” balls.

As you can see there are a number of ways that the games are similar. For example, you are trying to sink the specific ball to win.

Again, in both there are penalties for hitting and sinking balls out-of-order. Both games will allow you to keep shooting so long as you sink a legal ball.

However, for their similar points the games do differ quite a bit. First, one game uses nearly twice as many balls as the other.

Since 9-Ball is more of a shooter’s game and 8-Ball more of a thinker’s game, 8-Ball is harder to master.

Rotation games like 9-Ball require complex skills. A miss of one inch could ruin an 8-Ball position. But glorious three-rail kicks and combos save the day in 9-Ball-pros run five racks of 9-Ball far more often than 8-Ball.

Another similarity shared by both 8-Ball and 9-Ball is that they both involve hitting a cue ball into the object ball. The cue ball used for both games is solid white in color to distinguish it from the colored object balls.

Pros run more racks of 9-Ball than 8-Ball. They don’t go for the run in 8-Ball as often! Hustlers choose the game after watching the mark play a few games.They would rather play 9-Ball because the games go faster and the money comes faster. But they will jump at the chance to play a novice at 8-Ball, especially if they are playing call shot.

Whilst 9-Ball is a fundamentally different game to 8 Ball Pool, it’s a dead easy game to pick up and play. We have a whole host of different tutorials with both Gareth Potts and Karl Boyes who are masters at each game respectively, and can go into detail on the finer points of the games.

Last,8 Ball Pool is the largest multiplayer game of its genre, netting thousands of players daily. To enhance your adventure and compliment your gameplay, you can buy 8 ball pool coins from our list of reputable sellers here at z2u.com in a safe secure environment and at cheap rates.